Founder, CEO, Chief – call it however you want. Sebastian is the brain of the brand, he’s the one who had the idea of a new, unconventional label with outstanding products. His love for music and Great Britain had gotten him some very helpful connections in designers such as Craig Robson. From the very beginning on, Sebastian believed in bsclly, and he’s the one keeping it alive and moving forward. Finding the right designers, keeping an eye on our stock and placing printing orders are totally his tasks. Sebastian has a dream of what bsclly will be in the future, and he’s definitely fighting for it to become real.

Now that all of you know the faces behind bsclly, of course there is an important question remaining: how did we get here, how did this all happen? Understanding the story behind BSCLLY first of all means knowing that basic and usual is everything Sebastian never wanted to be. Ever since, he always longed to be special. Family, friends, even teachers in school always told him: You can reach everything you want in life, if you only work hard enough and full of passion. And this is where the story begins.


GETTING TO KNOW THE FIRST CUSTOMERS
In 2008, our CEO started participating in the Still In Mind Booking agency with a friend. They were not only the helping hand of a big local promoter - Mount Caldera Promotions - with organizing music events like Never Say Die Tour or New Noise Festival, but did also receive offers to promote shows from Avocado Booking in and around Karlsruhe, Germany on their own. Throughout the next two years, Seb got to know many people and members of bands like Your Demise, Salt the Wound and even Parkway Drive.

EARLY 2009 – IDEAS TO THE PAPER, PLEASE.
In early 2009, ordering non-usual shirts from the US or UK wasn’t enough for being special anymore. Everyday life, including music, movies, books and art in general formed many ideas in Sebastian's head. These ideas, he wanted to bring to life – to be more specific bring them down on clothing. Catching up on how to start your own clothing line also required getting to know designers. Therefore, Seb got member of a well known internet community for tshirt design, having the chance to be part of discussions between owners of popluar brands like Kyle Crawford from Electric Zombie, Johnny Cupcakes himself or designers like Craig Robson, Dan Mumford and Keaton Henson. Soon, the first emails were sent out to designers Sebastian thought fitted well to his ideas. Finding  a name went real quick, the designs were finished in short time and there it was, May 2009: PARTY SMARTIE CLOTHING.

CONNECTIONS, CONNECTIONS, CONNECTIONS
Starting out with internet advertising and the help of local bands from the “neighborhood” (The Haverbrook Disaster, Elude The End), the connections Seb made during his work for SIM Booking helped spreading the brand a lot. Soon, bands like Your Demise, The Eyes Of A Traitor and Paige wanted to be sponsored too – and not only them. German artists Casper and Prinz Pi heard of the growing line, and them wearing the shirts made their fans Party Smartie Fans, basically overwhelming Sebastian with orders.

2010 - INTERVIEWS, FESTIVALS AND MAGAZINES
After a successful first year and soon empty stockings, a new collection had to be done. Packing the new shirts in the trunk of the car and some helpful hands in the back seat, bsclly's Chief visited several festivals like the Summerblast and New Noise Festival in Germany, or even the Groezrock in Belgium. PS got more popular every single day, and soon websites like lachsauge.de wanted an interview with the boy packing every single order in his room by himself. Casper still wore the shirts during concerts, the UP Magazine printed off one of the new designs and finally, the brand appeared on german, yes even british television through singer Lady Sovereign.

To Sebastian, being special not only meant unique designs on great shirts. He wanted his customers to share that feeling of being extraordinary. Contests with free shirts and even a brandnew ipod nano as a reward were held, and every shirt package that was sent out surprised the PS fans with free buttons, postcards or stickers.

CHANGE OF MIND – CHANGE OF STYLE
2010 changed a lot. Seb travelled through the UK in February, staying with Craig Robson, whom he got to know in the tshirt community. Along with the change of taste in music came a different taste in clothing as well. But still, it wasn’t the common style that caught Sebastian's eye. He kept looking for shirts that made people think: Hey, where did he get his clothes from? While working as a delivery boy, watching people get crazy about their orders finally arrive, the idea of a new, more basic clothing line popped into his head. September 2010. The second first mails with design ideas were sent out to Brandon Gallagher, Jeff Buchnan and Theo Gosselin. After finding the right name for the new line, Seb asked Peter Mason, whom he also met during his stay in Manchester to create the new logo. Only 3 months later, five new designs completely associating with the first ideas were ready to be printed in the US.

MAKING IT PEFECT
The printed shirts were sent in the early weeks of 2011, so some may ask why the first collection has come out just now. First of all, we are both students of business administration, so exams and internhips cost a lot of time in the first three months of the year. After a four-day-trip to Liverpool in April, visiting Craig Robson once more, Seb finally could start work. He looked for the perfect hem tags to sew into the shirts, had to run them in all by himself and organized a photo shooting. Since we wanted everything to be perfect, the photographer was not randomly chosen: our good friend Michael Gebhardt of Scornography took our amazing pictures, and we will definitely get back to him concerning photographic activities. To make it short: Not only Shirts with a print on is what Seb had in mind when founding bsclly - he wanted it to be unique.

TO COME TO AN END
So here we are now, finally satisified and ready to make everyone out there happy, too. Even though it definitely took some time, you can be sure that the shirt you might order and hold in your hands is special and made out of passion - so take good care of it and enjoy! 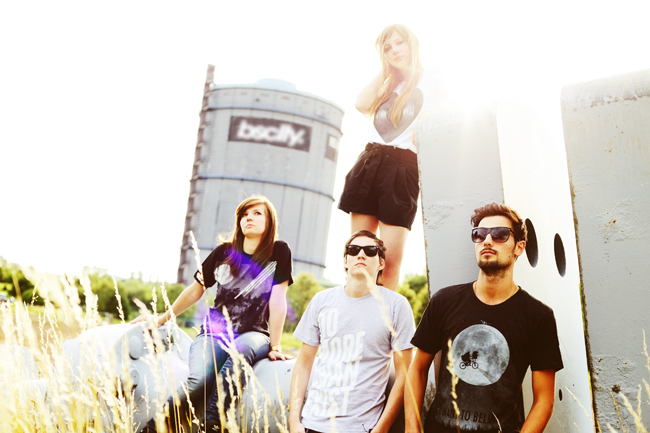